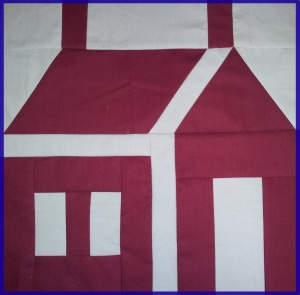 We did a dash to the library on a recent Saturday evening, arriving just as they were about to close for the night. I made a bee-line for the craft shelves and quickly grabbed a copy of Houses, Cottages and Cabins Patchwork Quilts by Nancy J. Martin, published by Dover Publications Inc in 1984. It’s a book that falls into the ‘worth borrowing, wouldn’t want to own it’ category, which is where libraries are perfect. The book includes finished quilts and household items built around a theme of house blocks.

The book has templates for different styles of house and school blocks in a range sizes. I decided to start with a 12 inch house block. I traced the pattern onto sandwich paper and pinned the pattern pieces to my fabric before cutting them out. I must say I enjoyed the contrast of not using the rotary cutter. Sure it was slower, but the work had a relaxing rhythm and a kind of intimacy.

This project allowed me to use the Swedish steel scissors that we picked up at a car boot sale on our European trip in 2010.

A piece of Sweden's industrial history

My scissors are stamped with the anchor that indicates they were made by Jernbolaget Eskilstuna, which was established in 1868 and continued for about 100 years after that. However there has been industry in that part of Sweden for a lot longer than that.

Eskilstuna has been a base for the steel industry since at least 1654 when the Swedish king Carl X Gustav offered Reinhold Rademacher generous export concessions in exchange for setting up a steelworks there. It’s nice to think that these scissors are a product of that long-standing industrial history, though they are of course of more recent manufacture.

Quilting and Craft in Scandinavia

The reason for the long silence in terms of updates is that I have been away on a four week vacation to Germany and Scandinavia. The trip was excellent and all my detailed planning really paid-off. Even though I think it occasionally drove my beloved a bit crazy, I found it very useful to have rental cars booked in advance and train tickets already purchased.

The itinerary in brief was a week in Munich, a couple of nights in Oslo, then to Sweden by train, where we spent almost three weeks, with five nights in Stockholm and the rest of the time split between a farm house in Sodermanland province and a holiday cottage in Uppland province. Anyone planning a vacation to those parts is welcome to get in touch for tips. 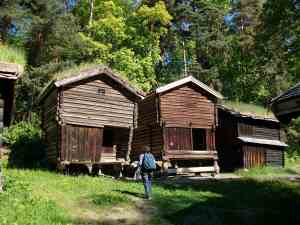 While my beloved focussed his attention on matters relating to engineering and boat building, I paid particular attention to crafts.

For craft related matters I would particularly recommend visits to the Norsk Folkemuseum in Oslo and Nordiska Museet in Stockholm. The Norsk Folkemuseum has a fascinating collection of traditional folk clothing from different regions, while Nordiska Museet had an amazing embroidery collection, as well as a display of folk arts and fashion over time. One of the most interesting things I saw there was a sheepskin petticoat, designed to be worn with the woolly side facing in. Just the thing for those freezing cold Scandinavian winters. 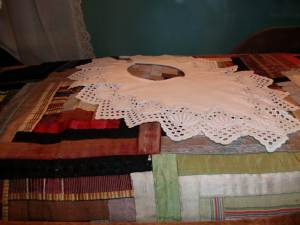 I saw only two historic patchwork quilts on my travels, one roughly made of woollen squares in a Swedish 1800s rural home and one finer log-cabin cot quilt in a recreation of an urban 1800’s home at the Norwegian Folkemuseum. I can only guess that Scandinavian women focussed their attention on weaving and embroidery instead, as they still do today.

I bought a couple of books on craft related topics on the journey and will post photos and a bit of commentary about them some time soon.